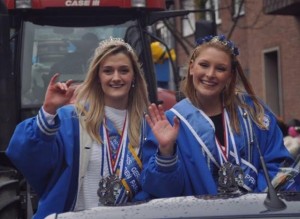 The New York City Steuben Parade representatives, Miss German America 2017, Caitlyn Walsh, and myself, the Miss German America Princess 2017, traveled to Cologne, Germany two short weeks ago to serve as Goodwill Ambassadors during Karneval in Germany, one of the biggest celebrations in the country.

I was honored to be invited to represent my German-American heritage in Germany. This once in a lifetime opportunity brought Caitlyn and me closer to our German roots, and to the German-American community that we are so proud to represent. Once we landed in Dusseldorf, Caitlyn and I were picked up by our host for the week, Frau Hinz. Frau Hinz is a 94-year-old woman, who does not speak English and resides in Hürth, Germany. 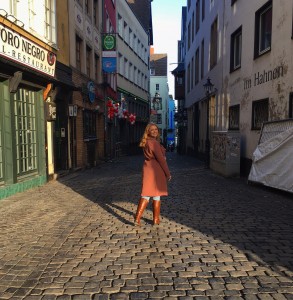 Once we arrived at her house, we unpacked our bags, threw on our gowns, crowns and sashes, and prepared for the first parade of Karneval. We rode in a convertible that had our picture printed on the hood and on the sides of the car. The German people, dressed in their costumes, were excited to see us as we waved, threw flowers and interacted with them. Later that night we went to Frau Hinz’ son’s house for a traditional German meal. I was happy to be engulfed in the culture my grandmother and grandfather came from and grew up in. There were many people at dinner on this night and the German language was intriguing to me. While I studied German for six years, I had never been exposed to it in this way before. I felt like I was a part of something bigger than myself on this night, it was truly eye opening. I was excited to be engaged in conversation and put my German to the test.

On day two, Caitlyn and I got to sleep in and let our tired bodies recover from jet lag. Frau Hinz knocked on our door to wake us up for breakfast at her house. We ate a traditional German breakfast that we would continue to eat each morning: warm soft-boiled eggs, bread and strong coffee. At noon, we piled into Frau Hinz’s station wagon style Mercedes Benz and watched another parade in the town of Hurth. I realized on this day just how dedicated to tradition the German people are, as they marched in the parade, or were pulled along on a float by a green tractor. They proudly wore their group’s bold outfits that represent where they are from. We collected candy and flowers that the people in the parade threw to us.

On day three, we attended Rosenmontag, or “Rose Monday”. We traveled with Frau Hinz to Cologne and met more friendly German people. Our first stop before the parade was to meet with important political figures for a breakfast event. After breakfast, we went to watch the parade festivities. Cultural pride and laughter filled the streets, I was in awe with this city and its people. 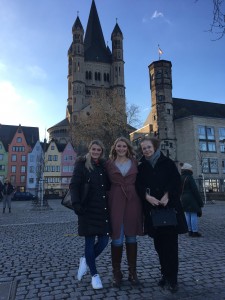 On day four, we met with the mayor of Cologne and discussed our purpose in Germany. He was very friendly, he spoke highly of his city and its people. Later that afternoon, Frau Hinz’s daughter-in-law, Monika, took Caitlyn and I into Cologne, where we got a personal tour of Altstadt, Neumarkt, the Rhine River and the Cologne Cathedral. Later this evening, Monika, Caitlyn, Bernd and I ate dinner at an Italian restaurant.

On day five, Caitlyn and I traveled to Cologne together. We shopped for souvenirs, ate at cafes, and took in our final full day in Germany. This day was bittersweet because we were so happy to be there, but so sad our trip was coming to an end. On Friday, we packed our things and said our farewells. Germany taught me so much about myself and my culture. The German people were wonderful hosts. They made me feel so welcome in a place so different than my own home in rural Pennsylvania. This trip was important to me, as it helped me to discover more about my own roots and self-identity, and I got to support an organization I am so honored to be a part of.

The German-American community is something that I consider myself to be very passionate about.  Keeping tradition and culture alive in a world where it is so easy to become consumed by fast-paced technology is refreshing and to see a community where their mission is to keep the past alive in the present day makes me proud to be German-American. I was honored to serve as a “bridge” between Germany and America for a week.

Without cultural appreciation, we would lose individuality and identity. I am excited to make another journey to Germany to visit my family there as well as the Hinz family and the other friends I made along the way.