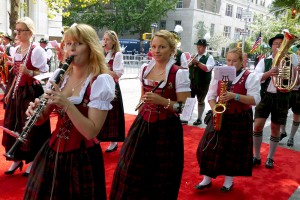 The German-American Steuben Parade is held annually on the third Saturday in September. It was founded in 1957 by German immigrants and German-Americans — one of the largest ancestral groups living in the United States, who wanted to keep the traditions of their homeland alive. They named the Parade after Friedrich Wilhelm von Steuben, a Prussian-born General who served with General George Washington in the American Revolutionary War. Von Steuben is still regarded as one of the most influential German-Americans for his contributions to America’s fight for independence; his training of the young American troops helped achieve victory against the British.

In April, 1956, the German-American Parade was first held in Ridgewood, Queens, on the 50th Anniversary of the Brooklyn Boys and Girls Chorus. Being a weekend celebration, it began with a concert at the Brooklyn Academy of Music, and concluded the following day with the Parade down Myrtle Ave., ending with a gala celebration at Schwaben Hall on Knickerbocker Ave. The outpouring of support for this event from the many clubs and businesses who participated, inspired the idea for a parade celebrating German culture to be held annually in New York City.

In 1957, the first official German-American Steuben Parade was held in Yorkville, known then as Germantown. The Parade marched up Fifth Ave., turning on 86th St, and crossed down to Second Ave. to cheering crowds and applause. Once the heart of Little Germany, 86th Street was affectionately called the “German Boulevard.” It hosted many German shops, konditoreis, biergartens, vereins, theaters, restaurants, newspapers, and dance halls. 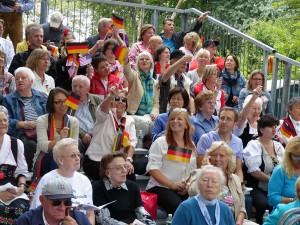 Today, the Parade continues to march up Fifth Avenue to 86th Street, led by cadets representing the German Language Club of the Military Academy of West Point, founded by General von Steuben himself. The three-hour Parade is filled with German groups wearing their traditional costumes, spectacular floats, marching bands, dancers, clubs, and organizations from across the United States, Germany, Switzerland, Austria, and Canada. Miss German-America and her court are crowned every May, leading the Parade down Fifth Avenue after serving as young cultural ambassadors to events throughout the year across the Tri-State Area. Every year, the Parade is led by a Grand Marshal, who is chosen through his or her reputation and contributions to the German-American community. Past Grand Marshals have included distinguished German-Americans, as well as German citizens with a close relationship to our country. To this day, the Steuben Parade is still considered one of the most colorful Parades in New York, thanks to our dynamic floats, representation, and colorful cultural displays.

The Symbols of the Steuben Parade are the national flags of both Germany and the United States, as well as the Cornflower. The flags were presented at the first Parade in 1957 by the presidents of each country: Dwight D. Eisenhower for the United States and Theodor Heuss for the Federal Republic of Germany. Every year these flags are carried by the Honor Guard, the American Legion Post of the American Turners, New York. The Cornflower – in German Kornblume – is distributed every year as part of the fund raiser for the Annual Parade, and it also graces Parade Souvenirs from T-Shirts to beer glasses and pins.

Who marches in the Steuben Parade?

The Parade brings together the entire German-American community. Groups include members from social and cultural clubs, sport clubs, religious groups and the masons. Each year, several groups from Germany visit their American friends, among them musical clubs, carnival organizations and Schützen corps.

For more information about the Parade, if you want to make a donation or be a part of this magnificent Annual event or the German-American Friendship Week in general, please contact: