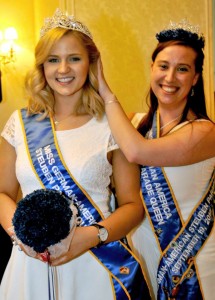 The German-American Steuben Parade Committee of NY is proud to announce the selection of the new Miss German-America & Her Court 2016!  Rebecca Joy Koehler, a resident of North Bergen, NJ is the new Miss German-America for 2016!  Miss Koehler is a student of Interior Design and Real Estate Photography.   Rebecca will hold a highly honored position in this year’s Parade, as she presides over the German-American Steuben Parade’s “Queen’s Float” on Fifth Avenue on September 17th, along with her court, which includes two princesses: Michaela Stuart of Greeley, PA, and Oona Yasukevich, a resident of Brooklyn, NY.   All three are pursuing higher education curriculums and are perfect representatives of the rich German-American heritage and culture of the New York area.

This year’s scholarship selection took place in a ceremony held at the Liederkranz of New York City, located in the heart of German-town (Yorkville) in Manhattan’s upper east side, on May 15.  The winner will receive a $5,000 scholarship at the end of her term, while each of the two princesses will receive a $2,500 scholarship.  Each applicant was interviewed by a panel of 6 judges.  After the judges cast the initial vote, each contestant was then introduced to the audience, who also had an opportunity to cast a vote for the scholarship winners! 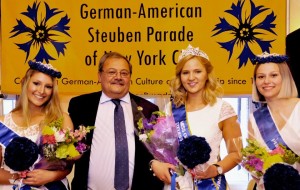 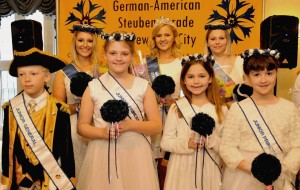 Close to 130 guests were in attendance, including the Steuben Parade’s General Chairman – Robert Radske.  Also present was the President of the German-American Committee of Greater NY – Michael Rabus.