Joann B. (Meyer) Siewertsen was a Princess and Acting Cornflower Queen in 1968. Today she is a member of several of the Plattdeutsche Vereins. She is very active and busy with them. Joann and her husband, Hans, who is President of the Foehrer and the PVV also attend many of the Parade events each year. 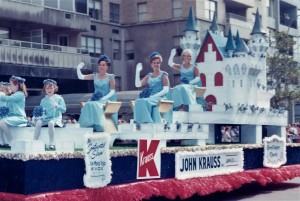 During her time in the court her favorite part was attending the many Volksfests during the summer, especially the Plattdeutsche Volksfest in Schutzen Park as she spent many summers there as a child. Another huge highlight for her was the actual Parade, having Neuschwanstein as the float’s theme.  Joann had been in Austria the year before as a college student and had visited the actual castle-so it really had a special meaning for her.

The summer after being in the court she became Acting Cornflower Queen and was awarded the trip to Germany. The trip is what the Queen was given at the time in lieu of the scholarship they are given today. This allowed her to visit family and friends again and do some more traveling on her own in Germany.

Her advice to new court members is to be yourself.  Enjoy meeting many new friends both from the USA and from Germany.  Some may become friends for a lifetime.  Go to all of the events that you are invited to.  In today’s world networking is a big concept and this is an excellent way to widen your horizons.

The first several years after she was in the court she became the Secretary to Josef Volz who was in charge of the Float Committee.  It was fascinating to work with him and seeing how the floats all came together.

For many years Joann marched in the parade or was on several different floats. 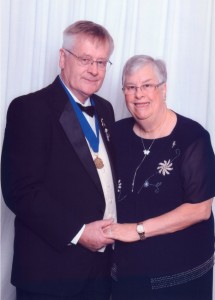 Some of the floats were an Olympic Float back in 1972, various Plattdeutsche Floats and Masonic Floats from the Noble Ninth District of the Masons.  The past few years she has been a viewer both from the sidelines and the grandstand watching her husband and sons marching proudly either with their high school, Masonic lodge or carrying flags for the Plattdeutsche Volksfest Vereen.

Joann spent 35 years in the teaching profession in Franklin Square and also substituted in the Farmingdale Schools for some of the German classes.

Joann loves traveling to many different countries around the world.  Of course she has enjoyed many trips to Germany to not only visit family, but also to see different places there. She still has one thing on her bucket list-that is to visit Australia and meet her pen pal that she has been writing to since 1965.  They connected through the Parker Pen Pavilion at the 1964-65 World’s Fair.