Twenty-five years ago in 1993, Heidi Lechner was crowned Miss German-America.  She applied after graduating from the University of Massachusetts, majoring in German, and wanted to put her  language and cultural skills to good use, along with honoring her family’s heritage and their involvement in the Bavarian Club Edelweiss Westchester. 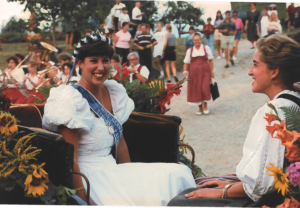 Heidi’s favorite part of her reign as Queen was meeting members of the German-American community by attending events in the New York and New Jersey area.  A close second would be her Good Will Ambassador trip to Germany in the summer of 1994, “I met so many wonderful people during that trip.  In fact, two friends from Grabenstätt are coming to visit end of this month!”  She even had a group of friends from Grabenstätt come to Chicago and do an Ehrentanz at her wedding 15 years ago!

Her words of encouragement to future Court Members would be to “socialize and meet new people during the events.  We need young people to continue the work of past generations in upholding German traditions and encourage new people to attend the Parade and other heritage events.”

Heidi keeps the German culture alive in her life today.  She is currently a high school German teacher and previously taught at the university level.  She has spoken German with her two daughters since birth and  her “bilingual household is full of laughter and language jokes”.  She also likes to take a yearly trip to allow her daughters to keep learning the German/Bavaria culture. 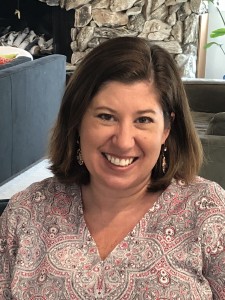 Because she no longer resides in the Tri-State area, she is ecstatic that the Parade has been live streamed the past couple of years so that she gets a chance to watch it!  She still recognizes a few familiar faces and loves that the Parade continues to have wonderful musicians and dancers from various parts of Germany each year.

As a teacher, Heidi often teaches topics of identity and multiculturalism in an attempt to break out of German stereotypes.  If she were able to design her own float, she would like one that represents a more multifaceted side of Germany.