Get to Know Reichenbach Hall

Get to Know Reichenbach Hall

Many components come together to make every parade season special and new while honoring traditions. Fostering community is the most important (and in my opinion, the best) part of the Steuben Parade. In preparation for the 2018 parade season I have been chatting with our sponsors for some participant insights. One thing has become abundantly clear through these interviews: our sponsors are as much a part of the parade community as our visitors from Europe, those with Germanic heritage in the US, all the way to our canine participants! Sponsors feel connected either through their specific products or their own Germanic heritage.  Keep coming back to read more on our “Sponsor Series”. 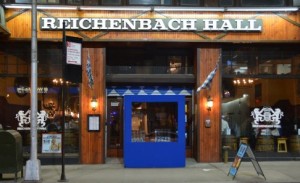 Reichenbach Hall holds a special place in many court member’s hearts both past and present, as many completed their interviews and were crowned there. Located in Midtown, it brings the gemuetlichkeit of Oktoberfest every day to its visitors. The authentic experience is complete with long benches and beautiful woodwork. I am very excited that this year’s crowning will also be held at Reichenbach Hall. To find out more, I interviewed Willy Reichenbach, one of the owners! 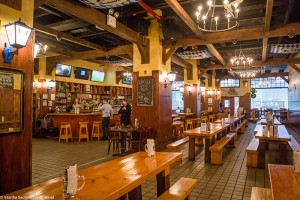 Like others, he was involved with the Steuben Parade as a participant before he was a sponsor. His first parade was in the late 90’s, where he had fun watching all of the floats and then going to eat at Heidelberg Restaurant and drink beer afterwards. Willy’s German heritage is strong, as his grandparents immigrated to NYC from the Stuttgart and Berlin areas in the early to mid-1900’s and maintained their love of German culture, food and beer. “Gerda spent hours in the kitchen, and when everyone arrived, a sumptuous repast of cold cuts, sausages, schnitzels and other German specialties were served along with loaves of pumpernickel and rye bread.” While talking to him, it was easy to feel the love that only an Oma can bring into a kitchen and how it led to he and his brother, Keith starting the Reichenbach Restaurant Group. They started with ‘David Copperfield’s House of Beer’ almost 20 years ago and more recently, opened Reichenbach Hall in 2012. Sometimes known as ‘The Beer Brothers’ these two have turned RH into “the largest and most authentic German Bier Halle in NYC” complete with many German specialties, huge pretzels and beers on tap (as well as bottle). 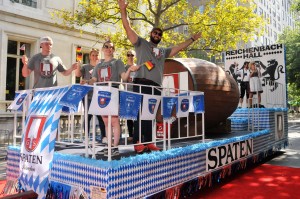 The first time RH attended the Steuben Parade as a sponsor was in 2013. Willy’s wife and daughter love getting dressed up in dirndls, as he wears his lederhosen. They ride on the Reichenbach Hall float and celebrate with ‘big liters of beer’. They will proudly be attending this year again and we are excited to see what new creativity this year brings. You can also find them on Facebook or on location at 5 W 37 ST between 5th and 6th Avenue in Midtown Manhattan. Visit reichenbachhall.com for a peek at their menu and upcoming special events. 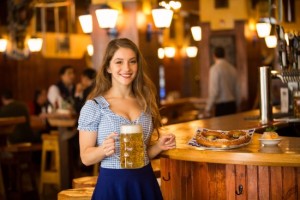 We hope to see you there at this year’s crowning, Sunday May 20th from 1-4pm!