Read about Cornelia’s reflections on being a Court Member, her advice for future candidates, and what her whirlwind Good Will Ambassador Trip was like!

What was a highlight of your reign?

The Steuben Parade weekend itself and the once in a lifetime experiences during my 1979 tour of Germany serving as a Good Will Ambassador.  This was a whirlwind tour of Germany I was able to enjoy with my mother (also my father and sister who joined us later to visit relatives) which will always hold very special memories in my heart.  I shall never forget the hospitality and kindness bestowed upon me – I was truly treated like royalty! 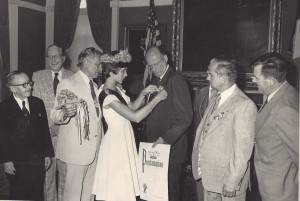 What made you originally want to be part of the court?
It was my father who encouraged me to apply after reading the ad in the German Newspaper, the New Yorker Staats Zeitung.

What is some advice or words of encouragement to the future courts?
My advice would be get involved in some way – volunteer for some organization or group, and if at all possible, celebrate your heritage at the same time but also respect others.

How did being a court member affect you in your present life? 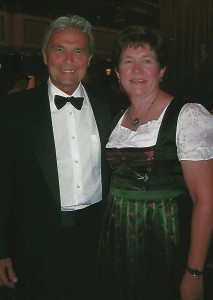 …as well as give me unique experiences like participating in the Closing Bell Ceremony at the NYSE and NASDAQ!

Have you stayed involved with the Parade Committee? If so, in what way? 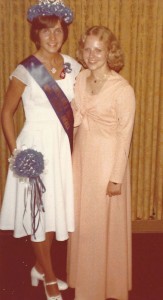 I stayed involved with the Steuben Parade Committee for several years after my reign ended and helped out at banquets and other receptions.  I took some time off to get married and raise a family but continued to march in the Steuben Parade each year, even with a baby stroller when my daughters were young.  Now, they march on their own with the Original Enzian, and I am a Steuben Parade Commentator, together with my best friend Elaine Gehnich, who also attended the 1978 Crowning Ceremony to celebrate with me.  I also translate the descriptions of the German groups from German to English and write much of the Steuben Parade commentator script.

Our daughter Christina Rom was selected Junior Princess in 1997 and 10 years later she applied and was voted Miss German-America 2007 for the 50th Parade.  After that time I again became more active on the parade committee which ultimately led to inheriting the position of Chairwoman of the Miss German-America Committee.  My husband Richard Rom who attended most of the events with me was then asked to consider the position of Treasurer of the Steuben Parade.

Has the parade changed since you were on the court? If so, how?

If you could design a float in the Parade what would the theme be?
Christmas, to include a Weihnachtsbaum mit Kerzen, Adventskranz, St. Nicholas (St Nicholas Day), Santa Claus, Hummel and Kaethe Wohlfahrt decorations since many Christmas traditions originated in Germany. 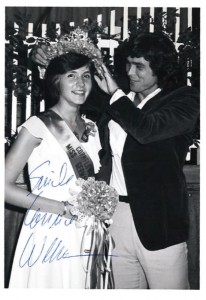 My selection as Cornflower Queen & Miss German-America of the 21st Steuben Parade in 1978 turned out to be the experience of a lifetime!

I was crowned by the handsome, young, Werner Roth, Captain of the Cosmos Soccer Team in 1978, following the Cosmos Soccer Bowl Championship in ’77.  I met him again years later when Werner served as Steuben Parade Grand Marshal in 2013.  Roth is a National Soccer Hall of Famer and graduate of Brooklyn Technical High School.

Brigitte Heinrich and Karin Stulz were crowned as Princesses of the 21st Steuben Parade.  Chairman of the parade was the late William Handeler Jr.

As for all previous 20 Steuben Parades, the White House sent a special representative to participate in the parade festivities – in 1978 it was William Woessner, Director of Central European Affairs.  Grand Marshal was Dr. Walter Bock.

Mayor Edward Koch, as well as Governors Hugh Carey of New York and Brendan Byrne of New Jersey, were among distinguished guests besides many other notable officials representing the five boroughs.  Special honored guest representing the West German government was Dr. Herbert Ehrenberg, Federal Minister of Labor and Social Affairs.

The Empire State Building, as a symbolic gesture highlighting the 21st Steuben Parade weekend of Sept 15, 16 and 17, agreed to have its lights in blue and white the traditional colors of the cornflower, the symbol of the parade. 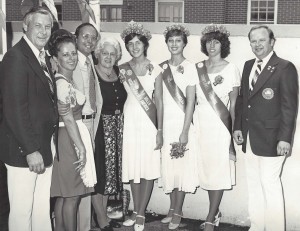 Miss German-America and her Court float was sponsored by the Wella Corporation and each candidate received a bag filled with Wella hair care products many of which I still use to this day.  Some other floats I remember include the Schaller and Weber carriage drawn by 6 Clydesdale horses (probably because my father was a Schaller and Weber butcher at the factory in Astoria Queens!).

Well over 20 groups from Germany marched down 5th Avenue sharing their music, their culture, their costumes and their love of New York City!

At the end of my reign, it was time to depart for a tour of West Germany (it was still East and West Germany at the time).  I was to serve as a Goodwill Ambassador between the United States and Germany.  Edith Handeler made all the arrangements which had to be accomplished via snail mail, fax and telephone!  The flight was sponsored by Schwaben International and the Deutsche Bundesbahn sponsored an unlimited Eurailpass for my travel within Germany.  Many of the groups who participated in the parade and who planned to participate in future parades extended invitations to visit their cities and learn about their home towns.  Unbelievably, while on my way, additional invitations poured in!  In Berlin I was greeted by the Junges Ensemble Berlin, attended an operetta, “Wie Einst in Mai” wearing my formal gown.  In Erlenbach I was driven in a local parade via a tractor driven float decorated by the residents with a royal chair, red carpet and beautiful hand-picked local flowers.  The Black Forest town of Bad Liebenzell hosted a rose ball – I had never seen a hall decorated in so many beautiful roses before!  In Heppenheim, after a private airplane tour of the surrounding area, I participated in an official wine tasting of 21 different local wines.  In Berching Bavaria there was a greeting and reception at the mayor’s office complete with musical entertainment by the local brass band.  At the railroad station in Munich I was greeted by an entire Schuhplattler dance club, the men wearing their traditional Leather Pants and the women their traditional Tracht wardrobe. We all proceeded to the Hotel Bayerischer Hof, one of the leading five star hotels of the world, where we celebrated my birthday into the wee hours of the morning!  My birthday celebrations continued to the next town Einhausen where the volunteer Fire Department Band held a celebration of music and dance.

The trip was educational too. I cast my own letter for a demonstration of the Gutenberg Press at the Gutenberg Museum in Mainz.  It was elections at the time in Mainz and the Mayor escorted me to City Hall that day to witness how their elections were run and how the paper ballots were tallied.  The Heidelberger Schloss Castle was next on the itinerary and the tour of the castle seemed fitting to my position!  Onward via Schnellschiff (fast ship) Köln-Düsseldorf from Bingen to the federal capital of Bonn where I met with the Vice President of the Bundestag Frau Annemarie Renken who served as the 5th President of the Bundestag from 1972-1976.  She was the first woman to hold this office and the first women to hold one of the five highest federal offices of the Federal Republic of Germany.  In Köln (Cologne), at the Römisch-Germanisches Museum, I learned about history and the Roman settlement of Colognia.  Normally closed on Mondays, the staff had to come in to give the tour just for me since my schedule only allowed for a short visit!  By this time I was glad for the stop and relaxation in the spa resort town of Wildbad where I was treated to the Fürstenbad spa treatment, reserved for nobles and royalty.

The bouquets of beautiful flowers and the kindness and hospitality of all I met will remain in my heart forever.  This was a once in a lifetime opportunity and I am so thankful that I was able to partake in it.  I invited everyone to come to the Steuben Parade and made so many new friends.  For years to come, I corresponded with many by mail and met them in Manhattan if they came to participate in the Steuben Parade.

And so yes, my participation as Miss German-America in the Steuben Parade has influenced and changed my life!  What a wonderful opportunity! 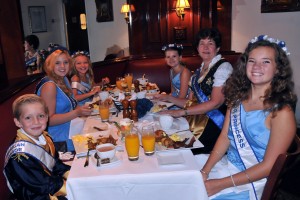 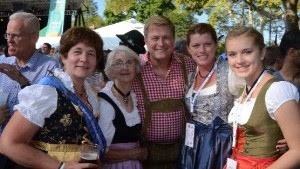