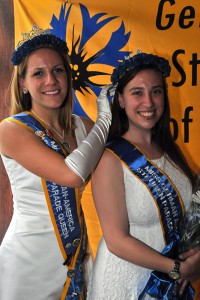 The German-American Steuben Parade Committee of NY is proud to announce the selection of the new Miss German-America & Her Court 2015! Samantha Hart, a resident of Bethel, CT, is the new Miss German-America for 2015! Miss Hart graduated from Fairfield University in 2014 with a bachelor’s degree in Integrated Marketing Communications and currently works for an advertising and communications firm in Connecticut. Samantha, who is fluent in German, will ride the German-American Steuben Parade’s “Queen’s Float” on Fifth Avenue on September 19, along with her court, which includes two princesses: Catherine Hatten formerly of Columbus, OH, now living in Manhattan, NY, and Rebecca Koehler, a resident of North Bergen, NJ. Miss Hatten graduated with a Bachelor’s Degree in German, and another in International Relations, from Ohio State University. She is a former Fulbright Scholar and currently works for the American Council on German as a Program Assistant. Miss Koehler is an aspiring photographer who has already won a major award for the National Youth Gathering in 2013 (1st place). All three young women speak German and are perfect representatives of the rich German-American heritage and culture of the New York tri-state area.

This year’s pageant took place in a crowning ceremony held at Reichenbach Hall in NYC on May 17. A packed house witnessed a pageant that included 3 finalists who competed for the title out of 5 highly qualified contestants. Miss German-America receives a $5,000 scholarship, while each of the two princesses will receive a $2,500 scholarship. Each contestant was interviewed by a panel of 6 judges. After the judges cast the initial vote, each contestant was introduced to the audience in a question and answer session after which each guest in attendance was given the opportunity to cast a vote for the Queen!

Over 100 guests were in attendance, including the Parade’s General Chairman – Robert Radske and the President of the German-American Committee of Greater NY – Michael Rabus.