MISS GERMAN-AMERICA 2018 AND HER COURT SELECTED

MISS GERMAN-AMERICA 2018 AND HER COURT SELECTED

The German-American Steuben Parade Committee of NYC is proud to announce the selection of the new Miss German-America & Her Court 2018!  Pavlina Schriel, a 23-year-old resident of Norwalk, CT, is Miss German-America 2018!  Miss Schriel is a 2016 graduate of New York University in Manhattan and currently a music teacher at Brookside Elementary School in Norwalk, CT.  On September 15th, 2018, she will ride the German-American Steuben Parade’s “Queen’s Float” on Fifth Avenue along with Princesses Sean Tomlinson of Clarks Summit, PA and Kirsten Rischert-Garcia of New York, NY.  Miss Tomlinson is a double major of German and Sociology/Anthropology at Fairfield University, Class of 2019. Miss Rischert-Garcia is a Masters student at Yale University, Yale Divinity School, Class of 2020. All three accomplished young ladies are extraordinary representatives of the rich German-American heritage and culture of the tri-state area. 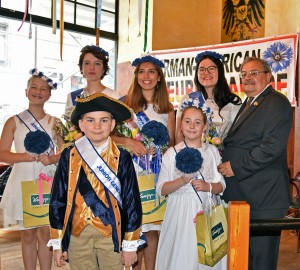 The crowning took place in a ceremony held at Reichenbach Hall in Manhattan on May 20th, 2018.  The assembled guests were introduced to each candidate with a question and answer session focused on German identity. Each contestant was initially interviewed by a panel of 5 judges.  After the judges voted, each  audience member had an opportunity to vote for the Queen! Miss German-America 2018 receives a $5,000 scholarship, her princesses each receive a $2,500 scholarship.

Over 120 guests were in attendance, including the Parade’s General Chairman Robert Radske, numerous Committee members, and various Club Presidents and Representatives from throughout the German-American community in the tri-state area. 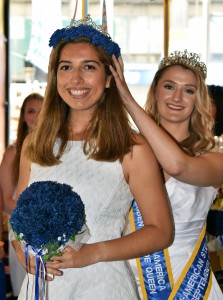 Departing 2017 Queen Caitlyn Walsh commented “My experience as Miss German-America has made me fall in love with my German culture and family history all over again.”