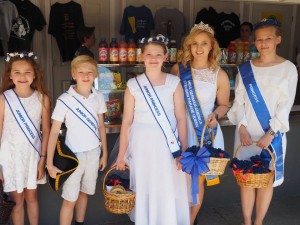 Oona Yasukevich is one of the two Princesses crowned for the 2016 Miss German America court.  Oona, 22, currently resides in Brooklyn but originally hails from Belarus. Her involvement in the local New York German community sparked an interest in applying for the 2016 Court.
Oona traces her interest in German culture not only to her family but from her involvement in SELK (Independent Evangelical Lutheran Church) throughout her childhood. Through her church, she would attend traditional German events such as Weihnachtsmarkt, Stadtfest, Volksfest and Oktoberfest.
When Oona moved to New York City at 16, she felt removed from her German/Austrian heritage. She took solace in finding a community in the city through the German Consulate General and Steuben Parade. She has since been a Parade volunteer selling cornflowers to the assembled spectators at the parade. She has found the community here very warm, saying “everyone is so welcoming and friendly- there is a sense of very positive family-like atmosphere at every German-American event.”

Oona is currently attending the New York School of Interior Design pursuing a BFA degree. While she is heavily involved in her design work (having worked for Steed Hale Interior Design and interning at MoMa PS1), she has great interest in aviation and aeronautics. She is interning with the New York Police Department and hopes to enter the academy in the near future.
chairman2016-08-06T00:53:00-04:00August 5, 2016|news|