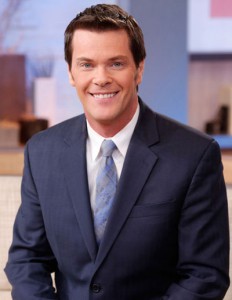 John Muller was born in Queens NY and raised on Long Island. He is a proud German-American whose ancestors hail from Bavaria.
He has become an icon of both local and national television news broadcasting.He is currently a news anchor for ABC News’ “World News Now” and “ABC News Now”. He is also a news correspondent whose coverage of national and international stories appears across all ABC News platforms. In the past, for a period of 11 years, Muller held the anchor positions at New York City’s innovative and Emmy Award-winning “PIX 11 Morning News”, and at WNBC-TV in NY, where he also worked as a reporter. He also held anchor and reporter positions in Georgia and Florida early in his career.

Muller joins a long list of prominent German-Americans from New York who served as Steuben Parade Grand Marshals. Dr. Henry Kissinger, George Steinbrenner, Donald Trump, Dr. Ruth Westheimer, Carol Alt and Linda Schmidt are but a few of those Big Apple personalities. Through the years, Muller has been a huge supporter of the Steuben Parade, often attending events with his family, and covering a few of the Parade Weekend’s festivities on the news.

Muller attended 12 years of Catholic school in Long Island, where he excelled at academics and athletics. He received a scholarship to New York University, where he majored in Journalism and Mass Communication, and minored in History. His first on-camera work was as a child model for the Ford Modelling Agency. He has taught broadcast-news writing and reporting as an adjunct professor at Fordham University, and has been a guest lecturer at his alma mater, NYU. He is an accomplished singer, performing in New York City clubs with rock-and-roll bands including shows with legendary guitar man Earl Slick. He is also an avid golfer, tennis player and hiker.

John Muller also gives back to the community. His charity work includes helping raise money for the Special Olympics and the Coalition for Asian American Children.

Muller resides in Tinton Falls, NJ, and is the father of daughter named Alexa, with his longtime partner and fellow journalist Ernabel Demillo.

The German-American Steuben Parade is held every year on the third Saturday of September. This year, the Parade will be held on Saturday, September 20 on Manhattan’s Fifth Avenue, from 67th to 86th streets. The Parade honors the many contributions of America’s largest ethnic group: The German-Americans.