Many components come together to make every parade season special and new while honoring traditions. Fostering community is the most important (and in my opinion, the best) part of the Steuben Parade. In preparation for the 2018 parade season I have been chatting with our sponsors for some participant insights. One thing has become abundantly clear through these interviews: our sponsors are as much a part of the parade community as our visitors from Europe, those with Germanic heritage in the US, all the way to our canine participants! Sponsors feel connected either through their specific products or their own Germanic heritage. Keep coming back to read more on our “Sponsor Series”.

European Deli is another wonderful sponsor of the parade; a company that cares about developing and maintaining relationships with their customers! Their creator, Terri Nelson, places the utmost importance on having the best selection and freshest product at the best prices. She has been involved with the parade first through her German husband and with other parade sponsor, Niche Import Co. Fun fact, he was the first person to import Asbach Uralt Brandy Chocolates in the US in the late 80’s. She left Niche Import Co after the sale of the company in September of 2016. Two brands were then created; Phoenix Wine and Spirits (2016) and Europeandeli.com (2017). Europeandeli was created to promote specialty German brands in the United States. They have been named the new and largest importer of Schmidt Lebkuchen on the United States. Phoenix Wine and Spirits will be focusing on specialty wines and spirits throughout the US. 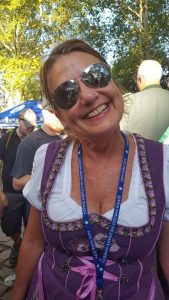 She first attended the parade in 1997 and has loved it ever since. Parts of the parade that have impressed her include the culture of the parade and how many different generations there are of people marching. It is always cute to see young kids dressed up and excited for their heritage. She also loves attending the cocktail party at the Gala, “as it is a time to say hello to old friends and meet new ones. I also enjoy hearing the Grand Marshalls speak and hearing about their background”. One of my favorite things Terri said about the parade was, “in pure German fashion the organization of the parade.” A great compliment and source of pride for the committee that works year-round!

Look for European Deli goodies at the Gala (night before the parade) in the Silent Auction as well as the gift bag. For their online presence, go to www.europeandeli.com