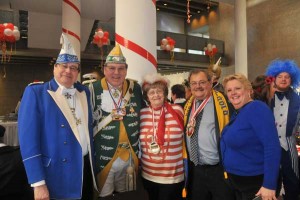 This year Anita and I received an invitation from long time parade supporter Frau Annalie Hinz, Karneval Groups and City Officials to visit Köln for Karneval.  Since this was our second time spending Karneval with Frau Hinz and her family, we knew that we would have a fabulous time.

We arrived in Köln on Feb. 4, 2016 which also happened to be Weiberfastnacht.  This is the day women have all the power.  On this day, the women have the right to approach any man and cut his tie in half.  That evening, Anita and I had dinner at the Burghof restaurant. In walks a woman in costume with a scissor cutting off ties.  I wish I would have been wearing a tie, since a kiss on the cheek is also included.

I also had the opportunity to visit the Karneval Museum, where Anita and I met Harald Michael, senior float builder. This was an amazing experience for me.  Seeing the floats and how they were built and decorated gave me many new ideas with regard to our parade floats.  The time and work that goes into building these floats is amazing.  For the parade in Köln on Monday, these floats were already being transported on Friday afternoon.

On February 6th, we were invited to the home of Bernd and Monika Hinz.  The town of Hürth has their own Karneval parade.  We saw many people dressed in colorful costumes, Blaue Funken, Grüne Funken and of course the Prinz and Prinzessin.  Bernd and Monika host a party every year after this parade, they serve traditional Kölner food which also includes Kölsch beer.

On February 7th, we were invited to see the parade in the town of Efferen, located on the outskirts of Köln, by Hans Nüchter.  Mr. Nüchter is a Senats-Vizepräsident with the Bürgergarde “Blau-Gold”.   We exchanged pins, scarves and presented Hans with a Steuben coin.   Hans also plays a big role in the Rosenmontag Parade in Köln and presented us with front row seats in the Tribune by the Kölner Dom. 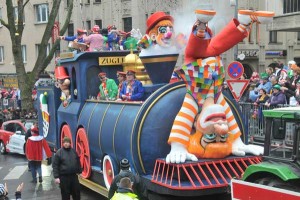 February 8th was Rosenmontag, the Big Day.  We attended the greeting at the Historical Rathaus in Köln where we had a great brunch which included Kölsch beer.  At the brunch, I was introduced to the Rote Funken, Stadtgaarde Colonia (who will be attending the 59th parade) and Oberbürgermeisterin Henriette Reker.  Oberbürgermeisterin Reker was presented with a Steuben coin and other parade souvenirs.  I, in return, received an Ordner with the saying “Mer Stelle Alles Op Der Kopp” (translation: “we are turning everything on its head”)—the theme for the Rosenmontag Parade. Oberbürgermeisterin Reker introduced us at the reception and expressed interest in attending the Steuben Parade in NYC in the future. The Rosenmontag parade was almost cancelled due to stormy weather, however during the City Hall reception the skies opened and the sun came out and lasted until the last float came by 4 hours later.   Newspaper headlines the next day read “Dusseldorf hat den Zug abgesagt, Köln hat den Storm abgesagt.”  (“Dusseldorf cancelled the parade, Köln cancelled the storm”)  During our trip, I had the opportunity to take over 900 photos of our time in Köln and Düsseldorf (a few are included below).

We would like to thank Oberbürgermeisterin Reker, Senats-Vizepräsident Hans Nüchter, Bürgermeister Dirk Breuer, Harold Michael,  Annalie Hinz, Bernd and Monika Hinz and all the supporters that we met for the invitations and the wonderful and memorable experiences. 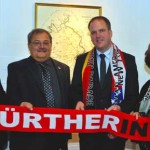 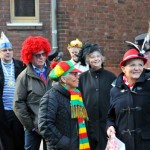 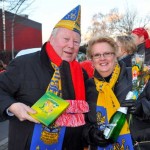 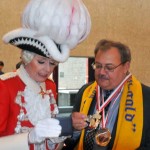 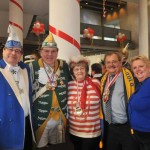 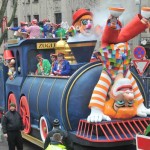 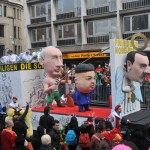 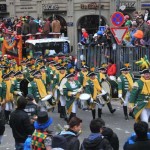 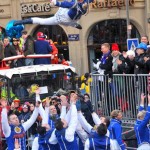