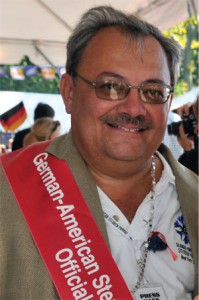 The German-American Committee of Greater New York has elected Robert Radske to be General Chairman of the 2014 Steuben Parade. Bob, as he is known throughout the German-American community in the tri-state area, has served the parade for five years as Co-Chairman of the Floats Committee and as a dedicated and talented photographer of the celebrated event on Fifth Avenue.

“I am looking forward to working with all of you,” said Radske after his election at a Director´s meeting held at Manhattans Liederkranz building, just steps from the parade route on Fifth Avenue.

Bob Radske is successor to Lars Halter, who had been General Chairman of the Steuben Parade for eight consecutive years. “Under the leadership of Lars Halter, the parade has grown vastly and has even made it on Public Television”, said Michael J. Rabus, President of the German-American Committee of Greater New York. The Committee chose to promote Halter to be Honorary General Chairman. Halter promised to stay active within the German-American community and the Steuben Parade and help his successor actively to ensure a smooth transition and pave the way towards many more successful parades in the future.

“I hope that Bob can assemble a strong leadership team like I was fortunate to have,” says Halter. The outgoing chairman thanked first and foremost his Vice Chairwoman Geraldine Brand, who´s passionate work for the committee has made recent successes possible. Halter only thanked his committee chairs, the many parade volunteers, sponsors, partners, friends, and especially Mike Rabus and Heinz Buck, the current and former Presidents of the German-American Committee of Greater New York.

“Putting the Steuben Parade on television was probably the biggest success in my eight years of leadership,” acknowledged Halter. There were other successes, though. Over the last eight years, the parade has grown vastly, attracting more marchers from the New York and tri-state area as well as other parts of the country. Halter added a “Continental Division” to the parade line-up and has filled it with groups from as far as Texas, California, Florida, Wisconsin, and New England. Traditionally, dozens of groups from overseas march in the Steuben Parade and in recent years have included many groups from Halter´s home region of the Black Forest, as well as Karneval groups from Cologne and bands from Austria and Switzerland.

Looking back at his years at the helm of one of the biggest German-American events in the United States, Halter is proud of the fact that progress was made in every aspect of the parade. Viewers today can see a tighter line-up on Fifth Avenue, enjoy longer hours and shorter lines at the Oktoberfest in Central Park, and buy exciting souvenirs, including DVDs of recent parade broadcasts. Halter is also responsible for “German-American Friendship Month”, established seven years ago as a month-long celebration and officially proclaimed by Mayor Bloomberg ever since. Over the years, Friendship Month has included a variety of events on history and culture, food and beer. Highlights include a reading with German comedy star Hape Kerkeling, concerts at Carnegie Hall featuring Austria opera singer Eva Lind and the famous Harmonic Brass quintet from Munich/Germany, a film screening with German Academy Award winner Pepe Danquart, a unique night of jazz with German-born musicians in the New York jazz scene, lively history lessons featuring guest speakers Kriss Roebling and famed authors Paul Lockhard and Maureen Ogle.

Last but not least, Halter acknowledges that the colorful floats in the Steuben Parade have become better with every new year. That is most certainly the work of co-chairs Doris Neugebauer and Bob Radske – and so it is, that the German-American community can be confident about the new leadership. “Bob Radske has shown true passion for the Steuben Parade,” says Halter about his successor. “Combined with his engineering background he was a tremendous asset for the committee and has overseen the construction of floats unlike anything the parade had seen before.” Highlights of Bob´s work include a float for the American Turners with actual athletes performing on parallel bars, as well as beautiful floats on the Brothers Grimm or historic figures including the parade´s namesake General von Steuben. Radske also built great Oktoberfest-themed floats for many of the German bars celebrating at the parade, and he has worked closely with partners including the German Information Center and the Consulate to build floats communicating a more contemporary message about German-American partnership.

Bob Radske, who is 58 years old and a Consulting Engineer for Mueser Rutledge, has overseen building projects on both sides of the Atlantic, including building work for IBM in Frankfurt and projects at the world-famous Sony Center in Berlin.

Radske resides in Glendale, Queens, with his wife Anita. He has two daughters, Nicole and Stephanie. The entire family is active in the Gottscheer community.