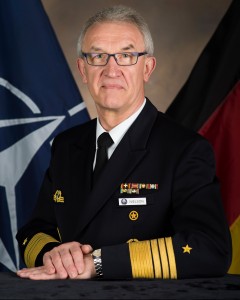 Admiral Nielson was born in Dorsten, Germany on February 25, 1955. He joined the German Navy as a reserve officer candidate and graduated from Helmut Schmidt University of the Bundeswehr in Hamburg in 1978 and completed underwater weapons specialist training in 1981. Early assignments included tours as a watch officer on coastal minesweepers Koblenz and Wetzlar, minehunters Flensburg, Cuxhaven and Koblenz and subsequently command tours of Tübingen and Paderborn. He also served as an action officer for the Armed Forces Staff at the Federal Ministry of Defense and Deputy Commander of the 6th Minesweeper Squadron in Wilhelmshaven. Admiral Nielson has commanded units at all levels. From 1996 to 1997 he commanded the 6th Minesweeper Squadron and following his promotion to Rear Admiral (lower half), served as Commandant of the Naval Academy in Flensburg from 2003 to 2005 where he deployed to Commander Task Force 150 during Operation Enduring Freedom. Promoted to the rank of Vice Admiral in 2010, he was appointed Commander in Chief of the German Fleet in Glücksburg. Other significant tours include service as Chief of Division I Personnel, Social Services and Central Affairs Directorate of the Federal Ministry of Defence and later as the Director of Armed Forces Staff. In April 2012 he was appointed Chief of Staff Joint Support Service of the Bundeswehr. In March 2016 he assumed duties as Deputy Supreme Allied Commander Transformation in Norfolk, Virginia. Admiral Nielson holds a Masters Degree in Economics and Organizational Sciences and is a graduate of the Admiral Staff Officer Course at the Bundeswehr Command and Staff College in Hamburg. His personal awards include the Gold Cross of Honor, for exemplary and meritorious service, German Armed Forces Deployment Medal and the German Flood Service Medal. Admiral Nielson is married and has an adult son and an adult daughter. 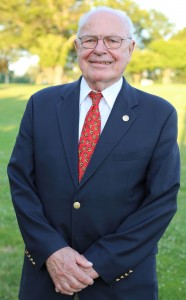 Mr. Heinz Buck was born in Armstorf-Horn, Niedersachsen, Germany on July 2, 1935. After he lost his father in Russia in 1942, Heinz along with his mother and two sisters emigrated to the United States of America on February 1st, 1950 arriving on February 22nd, 1950, George Washington’s birthday. He proudly became a US citizen in 1957. Once married, The Bucks raised their two daughters in Franklin Square, Long Island. Buck is the proud grandfather and great-grandfather of five grandchildren and 2 great-grandchildren. In 2002, widowed Heinz was remarried to the current Mrs. Buck, Renate.

Mr. Buck learned his trade as an aircraft mechanic during a tour of duty in the United States Navy serving as a flight engineer on an admiral VIP airplane. He began his civilian career in 1959 with Pan American World Airways, repairing aircraft in all corners of the world. He simultaneously attended college to further his education specializing in Transportation Management and Labor Relations. After 33 years, having risen to the position of Director of Aircraft Maintenance, his career came to an abrupt end when Pan Am World Airways declared bankruptcy.

In March of 1992, Buck joined a group of similarly impacted airline professionals to help form a new airline, Kiwi International Air Lines, where he served as Vice President of Maintenance and Engineering. His next career move was to accept a position with Atlas Air as the Regional Manager of Maintenance where he was based in Amsterdam, the Netherlands, for five years and responsible for managing the fleet throughout Europe, Africa, the Middle East and Asia. Heinz returned to the US based in Westchester and decided to retire after the events of September 11th, 2001.

Mr. Buck has always been actively involved in the German-American community predominantly with the Plattduetsche Volksfest Vereen in Franklin Square. He was elected Vice President in 1988 of the PVV and continued to serve as President of the organization from 1992 – 1993. Buck was also a member of the Lamstedter Club where he also held the title of President. Mr. Buck continues to be an active member of the Brooklyn Schuetzen Corp, the Bederkesa’er Club, the Otterndorfer Buelkauer Club, the Norddeutschen Brueder und Schwestern, the Sievener Club, the Steinauer Club and the Altenheim Gesellschaft. Currently, Mr. Buck is the President of the German American Cultural Council. Buck is also a Mason and a member of the Allemania Lodge F & AM in Whitestone, New York.

Since 1980, Heinz Buck has been an active member and supporter of the German-American Steuben Parade Committee acting as Grandstand Chairman and 1st Vice Chairman of the Executive Committee. Mr. Buck is a Director of the German American Committee of Greater New York and served as their President from 2005-2012. 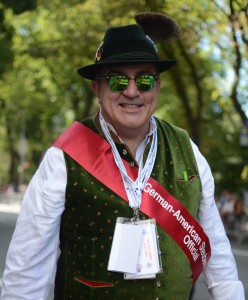 Lenny Coyne will be the 2017 Honored Guest. Lenny has been a long time Parade Volunteer. He is the Public Relations Chairman and organizes our Friendship Month Events. Lenny is also runs the Hofbrau Masskrugstemmen contests in the NY Area and then the final competition in Central Park at the Oktoberfest after the Parade.

Contessa Brewer, CNBC Correspondent – “Participating in the German-American Steuben Parade as a Grand Marshal has been one of the highlights of my time in New York. It was such an honor and a pleasure to join in the celebration of all the ways German immigrants have contributed to the success of the United States and all the ways we enjoy the influence of German culture.”

John Muller, Emmy Award-winning journalist and anchor of PIX11 News – “What an honor! My great grandfather must have been smiling from above. He left Germany as a tailor for the Prussian Army, before that he was a simple shepherd. Here I am…Grand Marshal! Marching up Fifth Avenue!

Dr. Ruth Westheimer, Journalist, Television Personality and Talk Show Host – “Congratulations to a wonderful organization I have been very pleased to be associated with. Alles Gute!”