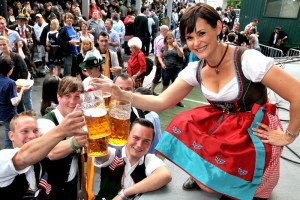 Don’t miss New York’s greatest Oktoberfest… Entertainment on the big stage includes “Spitze” and the “Alex Meixner Band” two of the hottest acts on the German-American scene. Many German groups from the Parade will also perform. Other highlights include the US Championship in Masskrugstemmen, presented by Hofbräu as well as a variety of German food, beer and wine.